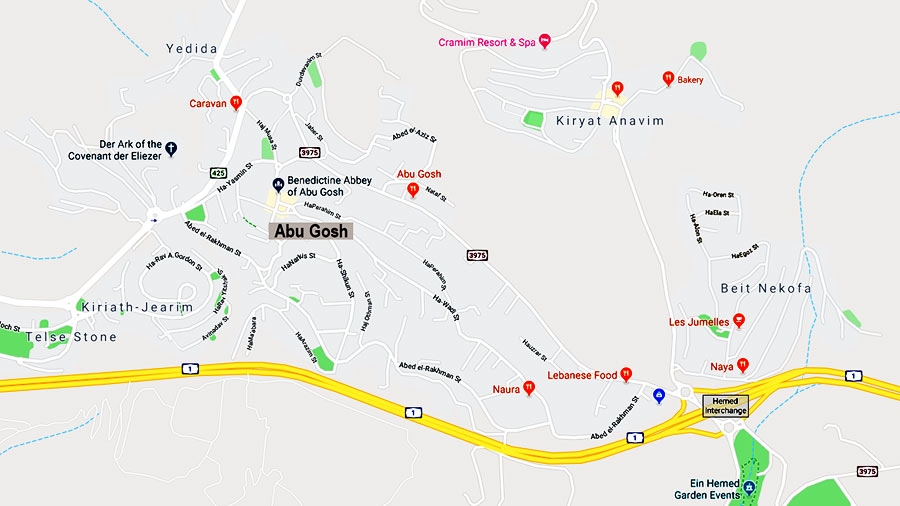 By: Cliff Keller — The day before Iranian major general Qasem Soleimani’s first funeral in Iran, he had four of them, a friend and I went on a search for a good hardware store in and around the Jerusalem suburb of Abu Gosh. My friend Derek (not his real name), an American expat who has lived in the Jerusalem area for over two decades, had remembered patronizing an exceptional building materials outlet in that quiet and diverse little village, once known in Arabic as Qaryat al-’Inab (“Grape Village”), and where modern archaeological excavations have uncovered three Neolithic settlement phases, the middle phase of which has been dated to the 7th millennium BCE.
The ancient place, now bordered on the south by six frantic lanes of the Tel-Aviv—Jerusalem Highway, has been identified with the biblical site of Kiryat Ye’arim, (Hebrew: “Village of Woods”), where , according to the sixth chapter of Samuel, the Ark of the Covenant was taken after it had left Beit Shemesh.
The hardware store we eventually found was very old too.
Derek is a delightful guy, even older than I, more naturally inclined to conversation and exploration than to actually making purchases, essential attributes for anyone hoping to remain sane in the city because the best of everything that the area has to offer is usually hidden and obscure. As a survival technique, American expats routinely share intel on virtually all commercial ventures not named Ikea, which currently operates three highly visible and unreasonably popular stores in Israel with a fourth scheduled to open soon.
“Do you mind if we drive around a bit?” Derek asked, in need of a special lightbulb.
I agreed and we soon found ourselves parked in front of a huge, abandoned concrete building in Beit Nekofa reading a poster, in Hebrew, reporting that the store Derek had in mind had relocated to another nearby village.
What followed was an adventure filled with meanderings and aimlessness that would have delighted A. A. Milne. In the course of our search, Derek drove, idled, backtracked up and down the neighboring hills, explored a rundown warehouse district (Derek found it fascinating), asked for directions at a small restaurant (Derek knew the owner!), passed two cemeteries and queried an Arab worker (who spoke almost no English) after following him into his neighborhood.
“I speak English,” Derek told him, smiling pleasantly. “I’m looking for the big hardware store that used to be down the hill.”
That went well, all things considered.
After another half hour of accosting strangers, my friend had slowly gathered enough information, while charming all those with whom he spoke with his genuineness and constant smile, to nail the relocated store’s location. Sure enough, it turned out to be one of the bigger and better-stocked hardware stores I’ve seen in Jerusalem, one which I will surely tell friends about.
At the end of the day, more than two hours meandering followed by five minutes of shopping yielded no purchases, but the day was not lost. Between our several random encounters that afternoon in the hillside communities bordering Abu Gosh, Derek had shared with me an important insight. “This area,” he told me, “is a perfect example of how Arabs, Jews and Arab Christians can live together without ill will.”
It was, indeed, such an example. On the same day upon which the Iranian terrorist state had begun a series of eulogies for their assassinated monster, my friend had charmed every soul he met, Arab or Jew, with his obvious sincerity and abundant good will.
And he had almost bought a light bulb.
On our way home, Derek stopped the car in the middle of the road and pointed across a parking lot at a small, attractive building nearly hidden among surrounding trees. “Is that a restaurant?” he asked.
After we eventually agreed that it was, Derek made a tight turn, having decided to check it out, and we learned that it was not a restaurant, but a bakery. Derek introduced himself to the owner, a woman, and volunteered how proud he was of her to have started her own business. She beamed of course, as had all the others we had met that day, when Derek promised he would soon bring his wife there for breakfast.

PreviousPrevious post:Community as a Way of Life – A Look at the Gathering
NextNext post:Dead Before It Was Born

Read the full Article
We invite you to continue reading this article and access to more content about Israel and the Messianic Community around the world. CLICK HERE